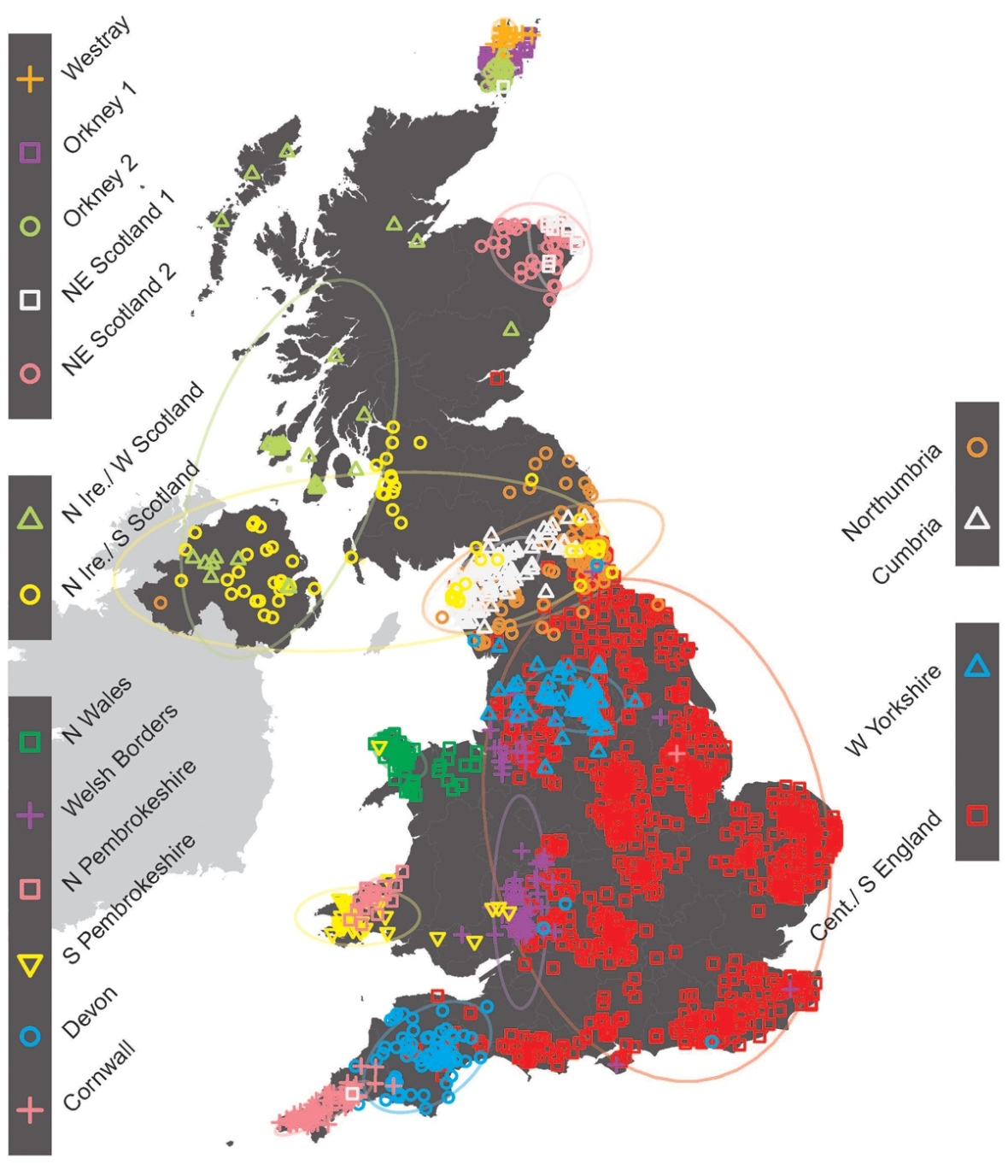 Britons are still living in the same ‘tribes’ that they did in the 7th Century, Oxford University has found after an astonishing study into our genetic make-up. Archaeologists and geneticists were amazed to find that genetically similar individuals inhabit the same areas they did following the Anglo-Saxon invasion, following the fall of the Roman Empire.

In fact, a map showing tribes of Britain in 600AD is almost identical to a new chart showing genetic variability throughout the UK, suggesting that local communities have stayed put for the past 1415 years.

Many people in Britain claim to feel a strong sense of regional identityand scientists say they the new study proves that the link to birthplace is DNA deep.

The most striking genetic split can be seen between people living in Cornwall and Devon, where the division lies exactly along the county border. It means that people living on either side of the River Tamar, which separates the two counties, have different DNA.

Similarly there is a large area in southern and central England with a shared genetic heritage which coincides with the boundaries of Anglo-Saxon England. Likewise, separate genetic groups can be found in areas of North and South Wales corresponding to the ancient kingdoms of Gwynedd and Dyfed.

In the North, specific groups were found in the North East, tallying with the area of Bernicia which was colonised by the Angles from Southern Denmark. And, intriguingly, a small genetic cluster was spotted in the West Riding of Yorkshire, which coincides with the former small kingdom of Elmet, one of the last strongholds of the ancient Britons.

Geneticist Professor Sir Walter Bodmer of Oxford University said: “What it shows is the extraordinary stability of the British population. Britain hasn’t changed much since 600AD.

“When we plotted the genetics on a map we got this fantastic parallel between areas and genetic similarity.

“It was an extraordinary result, one which was much more than I expected. We see areas like Devon and Cornwall where the difference lies directly on the boundary.”

Professor Mark Robinson, of Oxford University’s department of archaeology added: “The genetic make-up we see is really one of perhaps 1400 years ago.”

The ‘People of the British Isles’ study analysed the DNA of 2,039 people from rural areas of the UK, whose four grandparents were all born within 80km of each other.

Because a quarter of our genome comes from each of our grandparents, the researchers were effectively sampling DNA from these ancestors, allowing a snapshot of UK genetics in the late 19th Century before mass migration events caused by the industrial revolution.

They then analysed DNA differences at over 500,000 positions within the genome and plotted each person onto a map of the British Isles, using the centre point of their grandparents’ birth places, they were able to see how this distribution correlated with their genetic groupings.

Professor Peter Donnelly, Director of the Welcome Trust Centre for Human Genetics said: “It has long been known that human populations differ genetically but never before have we been able to observe such exquisite and fascinating detail.

“We used the genetic material to really tease apart the subtle differences in DNA. And we’re able to zoom in and see which areas are closer genetically.

“In a certain sense there are more genetic differences between North and South Wales than between Kent and Scotland.

The findings also showed that there is not a single ‘Celtic’ genetic group. In fact the Celtic parts of the UK (Scotland, Northern Ireland, Wales and Cornwall) are among the most different from each other genetically.

And the research has finally answered the question of whether the Romans, Vikings and Anglo-Saxons interbred with the Brits or wiped out communities.

The team found that people in central and southern England have a significant DNA contribution from the Anglo-Saxons showing that the invaders intermarried with, rather than replaced, the existing population.

But there is no genetic signature from the Danish Vikings even though they controlled large parts of England – The Danelaw – from the 9th century, suggesting they conquered, kept largely to themselves, and then left. Only Orkney residents were found to have Viking DNA.

“We found that 25 per cent of the DNA of someone living in Orkney is from Norse ancestry which suggests that when the Vikings arrived the intermingled with the local population rather than wiping them out,” added Prof Peter Donnelly.